What Is The Metaverse? 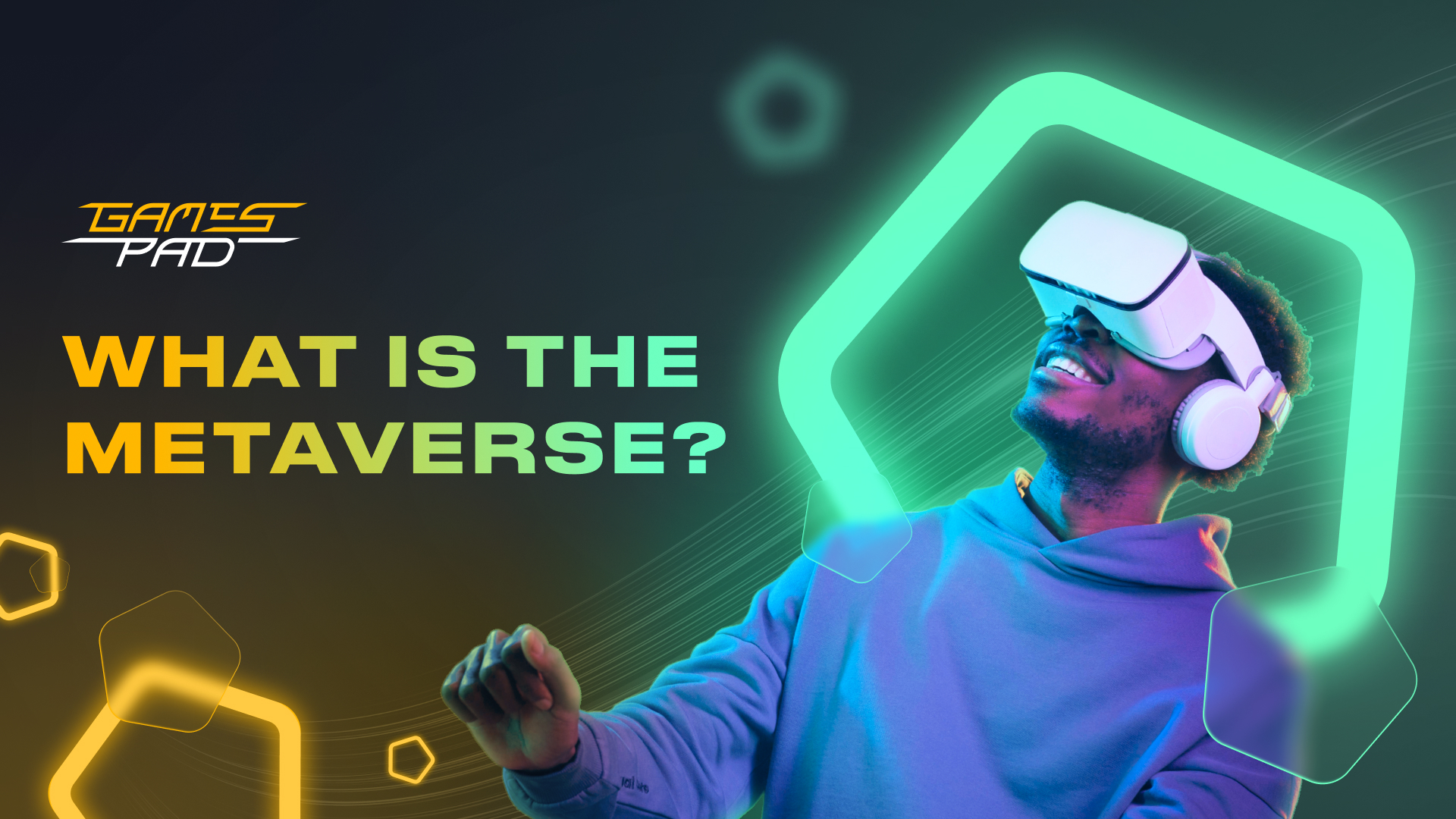 One of the most frequently asked questions of 2022 definitely is: “what is the metaverse?”. The idea of the metaverse caught the attention of the masses and gained some buzz last year, particularly after the rename of Facebook to Meta.

While tech buffs and specialists have been dwelling about the metaverse in technical terms for quite some time, laypeople are having a hard time understanding such statements and actually believing that humanity already has the means to make this science-fiction dream come true.

Here you’ll find a translation of all the technical talk into a comprehensive and timeline structured explanation so you can understand once and for all what the metaverse is about. Check it out!

Broadly, a metaverse is a hypothetical network that combines several virtual worlds and allows interoperability between them, meaning that users would be able to navigate the ecosystems smoothly and use the same digital assets across the metaverse. Since it would mirror the real world into the web 3.0, award-winning engineer Thomas Frey describes it as the “byte-based alternative to our physical atomized world”.

It does not describe a new technology tool or gadget; instead, the metaverse could be about a new method to connect with and via technology. In theory, it would allow us to use its digital spaces to interact with other users as if we were in the same physical room as theirs.

The metaverse that big organizations such as Meta, Microsoft, Sony, and Epic Games want to build can be seen as the next frontier of the Internet, as it would converge multiple elements of technology, like Virtual Reality gear such as Oculus Quest, Augmented Reality, Brain-Computer Interfaces, and video games, so users could potentially build a new life and identity on digital grounds. The expectations are high: individuals would be able to work, play, socialize, travel with their custom avatars.

Does the metaverse already exist?

This version of the greater metaverse, however, is yet to come. While the technology to build such a vast and futuristic network already exists, it is still above the average public’s reach. This metaverse would also demand the unification of companies’ forces to create a decentralized grid, but there are still too many business and economic matters at stake for that.

While the promising future of a unified metaverse is in the making, several smaller companies and startups are developing their own metaverses, usually with the help of blockchain technology. Metaverses are being created for virtual work environments, social entertainment, gaming, and many other distinct goals.

Such metaversal projects already provide users with a sense of digital self, allowing them to buy land and participate in the in-game economy, sometimes even supplying users with toolboxes to build their own worlds and games in the metaverse.

Some popular projects that have been catching the metaverse-enthusiastic community are:

The idea of the metaverse gained popularity among the average public throughout 2021, when in March, Google registered 100 searches for this term for the first time. But this concept has been floating around tech leaders’ minds for a while, specifically after the 1992 sci-fi novel Snow Crash launch.

Snow Crash’s author Neal Stephenson was responsible for coining the portmanteau metaverse, which literal meaning can be “higher universe” or “universe beyond”. In this historical episode of technology imitating art, Stephenson’s novel has been since served as a roadmap for some of the tech industry big names that often refer to the book as the visionary image of a virtual universe merging with the physical one.

The Internet And Virtual Worlds

The novel was only the beginning. After the advent of the Internet in the 90s, the possibility of online social interaction became one of the core ideas of Massive Multiplayer Online games, combined the visuals and entertainment of video games with social features.

MMO games such as There, RuneScape, and Second Life exploded in popularity as users could explore new environments and express a new version of themselves with a virtual identity. These games allow players to build, buy and sell items in a virtual world and share experiences synchronously with thousands of players. As they are still inherently centralized and there is no unification between the gaming universes, experts often call them protometaverses.

The gaming industry continues to lead the path of evolving the metaverse concept. Several metaversal games gained popularity during the 2000s, such as Roblox, Minecraft, Fortnite, Animal Crossing, and several others. In 2021, Fortnite reached 350 million registered users, and Travis Scott’s concert on the platform gathered over 12 million views.

Big Tech And the Pandemic

Many gamers were already deep users of metaverse-like games, but no one was using this technical word. The hype around the metaverse concept started to heat up again after another fictional work gained the spotlight: 2018’s film adaptation Ready Player One. This movie transformed the collective imagination of a virtual reality future into concrete visuals.

It took a few more years for the metaverse to explode in popularity in 2021, after a whole year of rigid lockdowns worldwide during the first strike of the pandemic. Besides bringing several public health and political issues to light, the COVID-19 pandemic also accelerated the construction’s pace of a remote-first world dynamic.

Virtual work has become the standard for many professionals, and most of them don’t even want to go back to traditional on-site job opportunities. Major companies like Google, Microsoft, and former Facebook created and enhanced tools to facilitate virtual collaboration and socialization to cope with this new demand.

However, those platforms created as a palliative measure during the pandemic were centralized. They do not offer users an immersive and integrative experience as if they actually feel like they are in a work environment. Aiming to pioneer on the foundation of a greater metaverse, Facebook’s CEO Mark Zuckerberg rebranded the company to Meta and launched the Horizon Worlds initiative.

As much as 2020 meant a revolution for virtual collaboration apps and spaces, it also presented a significant development of blockchain-based technology and projects.

New protometaverse games like Axie Infinity rose, presenting decentralization and real-value economics as prominent features. Soon after, projects built on blockchains focused on the metaverse also gained popularity, such as Decentraland and Cryptoverse. In these games, users can buy virtual land and build wealth with digital assets.

Combining blockchain technology with the metaverse represents the start of a new era for the virtual world. Instead of big corporations in control, individuals create open, interconnected digital worlds that parallel the physical one.

What makes the metaverse so wanted is the combination of so many technological and practical features currently fragmented through numerous separate applications and platforms.

Get to know some of the metaverse’s most sought-after attributes:

Creating a digital self through a digital avatar is one of the core aspects of the metaverse. Pre-made characters or a third-person narrative are no longer representing the users. Instead, they can be seen through authentic virtual versions of themselves that can mirror their physical bodies or not.

Individuals can express themselves by customizing their avatars with exclusive NFT fashion and accessories, building an online personality and presence. This ability will soon expand to digital homes that users will buy and rent to later decorate to their taste.

Metaverses are massive open-world ecosystems that allow users to meet with others in virtual environments and have a true sense of socialization. People can meet for work gatherings, parties, concerts, or simply to chat while wandering through a rainforest-like virtual space. Roblox, for example, is already preparing rooms for educational purposes.

All online social interactions currently scattered through different social media apps are converging into holistic experiences in the infinite worlds of metaverses. Such platforms are becoming all-in-one solutions when it comes to online social exchanges.

The in-world economy is already a reality for metaverses, as most offer their own currency. In fact, crypto-based metaverses go beyond traditional in-game economics by creating real-world value tokens that can be traded for crypto coins or fiat money on crypto exchange platforms.

Many users are profiting from the increased value of metaverses’ tokens and selling collectible one-of-a-kind NTF items. On the other hand, developers are also gaining significant revenue from selling virtual NFT lands. Virtual lands in metaverses are worth millions, as The Sandbox shows by selling a plot of land for €3.8 million.

Metaverses are user-defined parallel realities that exist in real-time and never stop working. In the future, it will also let users seamlessly hop between virtual worlds and carry elements from one world to another. Such a feature will definitely require powerful and speedy connections so users can enjoy frictionless experiences.

For now, although many people think that accessing a metaverse requires fancy and expensive VR headsets and AR gear, most metaverses currently available can be accessed from many forms of hardware. Mobile devices, computers, and wearables are enough to enter virtual worlds.

Is Meta’s Horizon Worlds the only metaverse?

To put it simply, no. As explained before, the current version of metaverse essentially describes a virtual world. There are countless metaverses like that, and Horizon Worlds is just another one of them.

Meta is investing billions of dollars in order to evolve and expand Horizon Worlds, make it more accessible to the broader audience, and hopefully, one day soon, transform it into the greater vision of the metaverse that lies in the collective futuristic dreams for now.

In short, Horizon Worlds isn’t the unified metaverse nor the only metaverse.

Get to know virtual world KARMAVERSE

KARMAVERSE is a metaverse that combines GameFi and SocialFi attributes while connecting all the games worlds of the games produced by the company. As the project wants to build a user-centric platform, they also distribute toolboxes for users so they can create their own games in the virtual world.

This metaverse offers interoperability between worlds, so the players or Karmanauts can use the same avatar in all the games and trade NFTs and Tokens in a centralized in-game marketplace that connects the whole ecosystem.

KARMAVERSE is launching its Initial Game Offering deal with GamesPad soon. Learn more about how to invest with GamesPad, and participate in the opportunity to invest in KARMAVERSE and other promising metaverse-related projects.

There is still a long way to go so we can actually live between the real world and a broadly unified metaverse. It might take five, ten, or even twenty years for it to happen, but what we need to know is that many companies are investing and putting considerable effort into making this hypothetical reality come true.

For now, we can already enjoy our virtual selves in individual metaverses by creating our virtual identity, meeting new people, gaming, and overall scaping our everyday life.