NFTs In The Music Industry: What Are Music NFTs?

Intro Is NFT only about images and visual content? Why NFT can be interesting for artists What musicians are doing NFTs? How to make music NFT and capitalize on it? 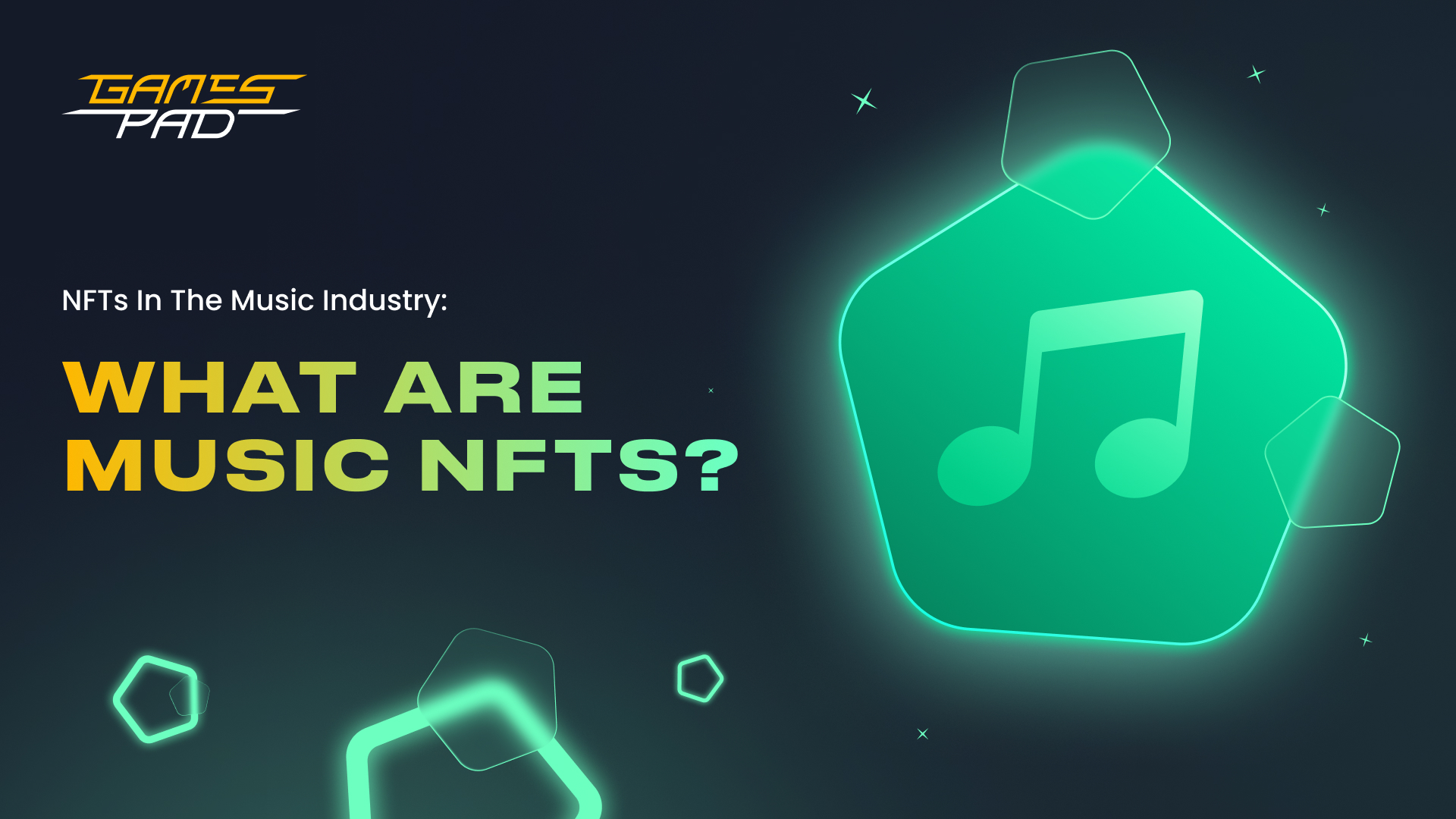 Get to know the universe of music NFTs, how it works, who is issuing this type of NFT, and how to invest in it.

NFTs are so mainstream right now that platforms and media outlets of the most different kinds and industries have already given their opinions on the topic. Even so, the comments are usually circling around how NFTs impacted the visual arts, design, and gaming environments, often leaving aside the music industry and the millions of dollars monthly spent on it.

In this piece, we’ll discuss how the music industry and musicians can and are already benefiting from the NFT frenzy, and you’ll learn if it’s worthy of your investment and how to do it. Let’s dive in!

NFTs are commonly associated with visual arts and digital design, as this type of artistic expression has quickly dominated the blockchain-based assets market. However, music NFTs are another fast-growing sphere in the NFT business.

At first, music NFT can seem like just the blockchain version of purchasing music, like iTunes. Yet, when you buy a song on iTunes, you are just purchasing the right to listen to that track. Music NFTs, on the contrary, grant you ownership of that material instead of just a license to listen to what you’ve just paid for. However, it is essential to take into consideration that NFTs don’t grant buyers any royalty or copyright rights unless it’s specified in its code.

Some people don’t understand why to buy the ownership of music you can already listen to. For others, however, it is all about creating a closer relationship with a favorite artist or gaining financial exposure to an unknown artist they feel will succeed in the foreseeable future.

There is an array of application possibilities when it comes to music NFTs. Depending on how the artist wants their NFTs to be structured, they can be used to gain access to exclusive sections during concerts, cheaper concert tickets, and even meet-and-greets. 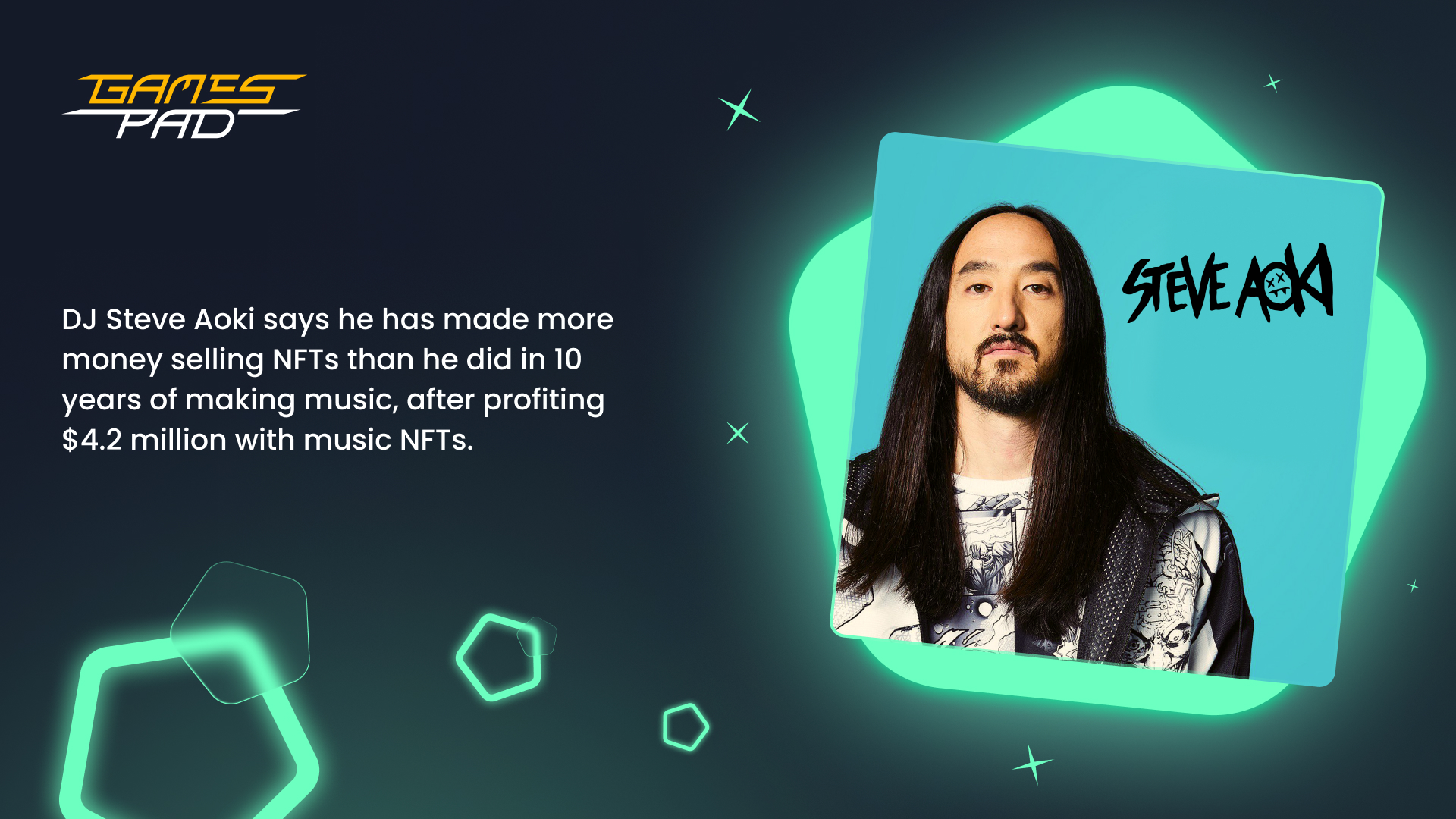 Why NFT can be interesting for artists

Although the concept of NFT can be tricky to understand at first, in particular for those who know close to nothing related to blockchain technology, the truth is that artists of all sorts are making millions out of digital assets.

DJ Steve Aoki pocketed $4.2 million in the first week of March, while Post Malone auctioned off an NFT to play beer bong against him. In comparison, the lesser-known Bajan artist Haleek Maul made 81 ETH from five catalog sales, which were valued at over $250,000 at the time, according to CoinDesk.

While these kinds of payouts would ordinarily take years for artists to get, NFTs have developed a new paradigm for artists to reach customers by bypassing intermediaries in distribution. Besides earning high profits during an NFT sale, artists can also benefit from royalties when the digital asset owner sells it to a new buyer if the royalty politics are described on the NFT smart contract. By doing so, musicians can gain more leverage since they now have another opportunity to sell their work by themselves.

Nevertheless, the NFT ecosystem doesn’t have space for naivety. Not every artist will be able to make millions of dollars in minutes, but all of them can develop innovative ways to use NFTs to interact more directly with fans and further their careers. Instead of selling it for a fraction of what the artist thinks it’s worth on streaming services, they could make a substantial profit as people place a higher value on the digital version of their masterpieces.

What musicians are doing NFTs?

One thing is certain: music NFTs will continue to transform the way musicians and fans collaborate to build community and art. Several unique NFT music collaborations have already launched and achieved great success. Here are some of the most popular ones:

The band’s initiative, NFT Yourself, offered the band’s current album, When You See Yourself, as an NFT, along with digital art and a collectible vinyl record. Other works of art based on the album’s concept were also sold, some of which came with additional advantages like lifetime front-row tickets to Kings of Leon concerts.

WarNymphs, Grimes’ 2021 NFT release, was more than simply music NFT; it was also a compilation of digitally made art and film matched to the music. On the NFT marketplace Nifty Gateway, a single unique item titled Death of the Old was auctioned for about $389,000.

Despite a small fan base and the auctioning of only 33 NFT-linked vinyl records, 3LAU made history in the music and blockchain industries by releasing the first blockchain-based album, Ultraviolet, in early 2021. The success of 3LAU demonstrates the value of knowing supply and demand, which brings us to our final issue.

After purchasing CryptoPunk #5528 in 2021, Mig Mora, also known as Spottie WIFI, became the world’s first and only CryptoPunk rapper. Mora then issued a seven-song EP in August 2021, limited to 2,000 copies. Each copy came with a surprise mint NFT, which allowed the buyer to have sync rights to the NFT’s master recording.

The music NFT marketplace OneOf placed an auction for Whitney Houston NFT. The asset included an unpublished demo tape of Houston when she was 17 and a digital video of Diana Sinclair, a 17-year-old critically regarded artist. The Whitney E. Houston Foundation received the proceeds from the collection’s sales.

While Coachella isn’t an artist, the music-centered event with worldwide popularity surely set some rules when it comes to revolutions in the music industry. Coachella announced plans for a multi-part NFT drop in collaboration with FTX crypto-exchange. Coachella Collectibles has a total of 11,010 NFTs spread across three collections, allowing fans to buy lifetime festival passes, unlock unique on-site experiences, physical collectibles, and more.

How to make music NFT and capitalize on it?

So, how is it possible to make music NFT? The Royal Exchange platform focuses on developing NFTs for the music industry and helps artists through the whole creation and minting process. Here’s how music NFT comes to life:

On Royal Exchange, the musicians make all the decisions. The first decision to make is about how much money they want to raise to understand how much of their royalties will need to be offered and for how long.

Other goals, such as if they want to sell only one song or an entire catalog, are also essential to get the project started.

You’ll need to create a standard or PRO account to submit your catalog.

The difference between the accounts is that the PRO version comes with an automatic method of gathering the information needed for investors to make offers and for the platform to provide you with a catalog analysis.

As soon as you’ve connected your accounts, one of our investors may make you an immediate offer. These are speculative bids made by investors in the hopes that a forthcoming catalog will fulfill their conditions. If there’s a match, you’ll get an offer that you may accept right away and get paid within a few days.

You may either accept it or reject it and make a listing.

If you go for listing, your portfolio will be presented to the largest community of music investors, who will compete to offer you the greatest bargain. You can choose between auctions or direct listing.

After the auction closes or you accept an offer on your Direct Listing, the platform will take care of the paperwork and deposit the funds into your account. Royalty Exchange will also handle future royalty payments.

Maybe you are an investor or a musician thinking about the wonder of the NFT business. Either way, the truth is that this is a new and thrilling trend that can end up in good profits, but sometimes it doesn’t.

If you’re considering putting some NFTs out in the market, you must keep in mind that the costs of launching a blockchain projects can be expensive, and the same may be said about purchasing music NFT. Marketplace costs, blockchain gas fees, and any royalties withheld by the artist when secondary transactions take place may diminish the resale earnings for an investor.

To enhance the chances of a profitable investment, the buyer should analyze successful NFT sales and observe how the supply of these tokens directly relates to the project’s eventual worth, aside from fan demand. In short, supply and demand are crucial factors to consider when purchasing music NFTs.

As musicians begin to experiment with NFTs and communicate with their fan base in a new way, the music business looks to be a new area for the crypto industry to disrupt. While artists can now consider the benefits of pursuing their own project versus more traditional methods of music distribution, investors can use this opportunity to expand their portfolio with this infant-stage new venture.

Subscribe to be the first to know when we launch

Be the first to know our hottest news