The Do-It-To-Earn Trend. The New Era in Crypto

Intro The birth of GameFi and P2E Types of monetization What are Play-to-Earn games? What are Learn-to-Earn crypto games? 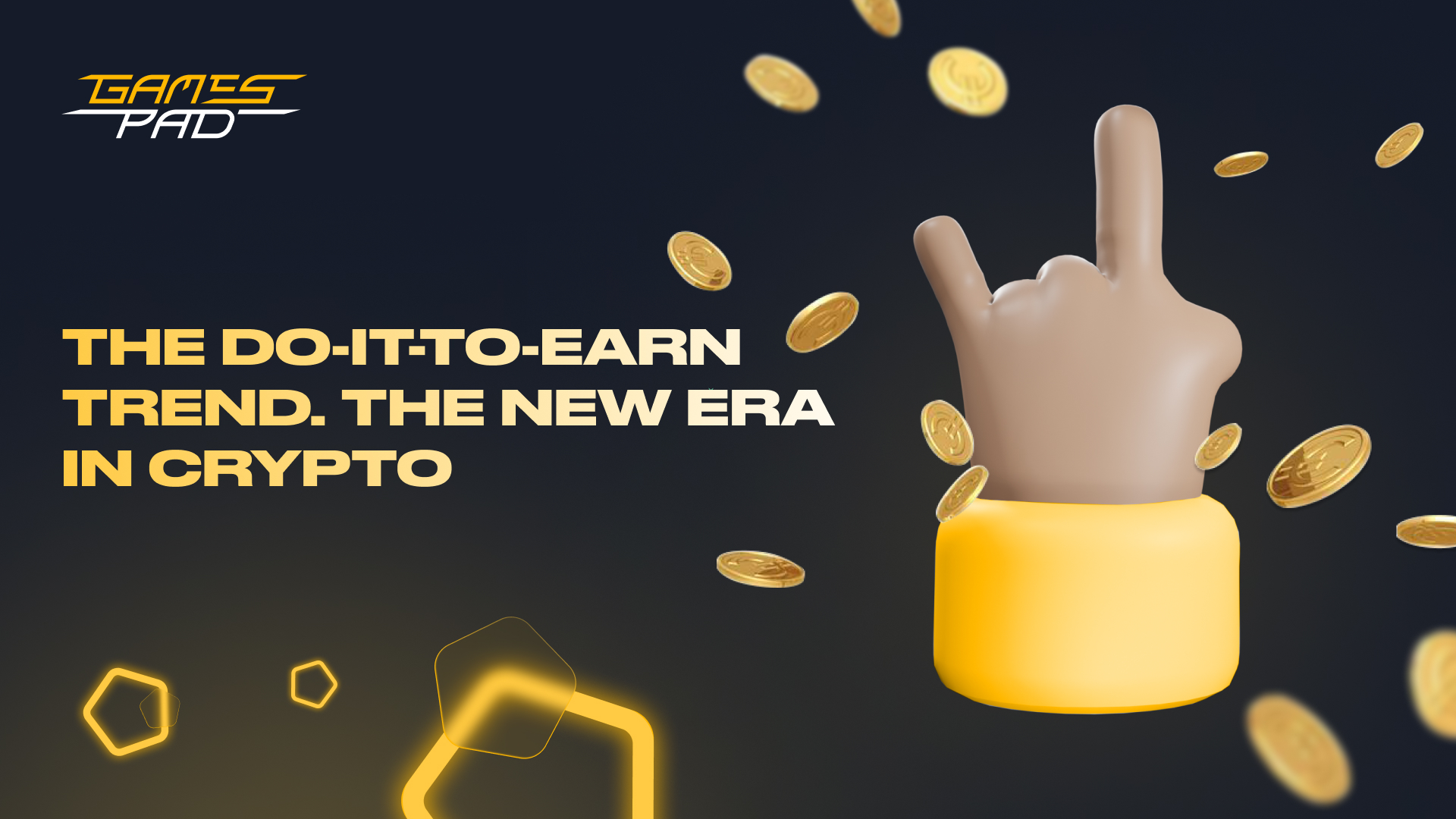 The crypto market is no stranger to innovations and groundbreaking developments. Leveraging the power of blockchain technology, the industry has consistently delivered on promises to offer cheaper, faster, and more accessible financial services, ushering in a new era of financial freedom.

However, the industry also has the potential to produce far-reaching benefits beyond this scope. One such concept, which has recently gained notable traction, is the idea of “Do-it-to-Earn.” As the name implies, the “Do-it-to-Earn” model allows participants to earn crypto based on various activities, ranging from playing and running to learning.

The birth of GameFi and P2E

The integration of the gaming industry and cryptocurrencies gave birth to a new world of GameFi, which introduced the idea of Play-to-Earn (P2E). In simple words, P2E is a framework that allows players to get rewards in the form of digital assets like NFTs or cryptocurrencies in return for playing games.

The P2E games usually have in-game tokens as well as NFTs. For instance, the popular blockchain-based game Axie Infinity has AXS and SLP as in-game tokens, while the Pokémon-esque creatures are NFTs. The majority of P2E games try to create sustainable economies by feeding incentives that balance the value of their NFTs and their tokens’ utilities.

The gaming industry, in general, can monetize either through utility or social. Utility involves selling assets with in-game value while social (which is also referred to as identity) concerns trading in-game assets that showcase status or cosmetic value.

Notably, the majority of blockchain-based P2E games have opted to monetize for utility. Axie Infinity, for example, requires players to purchase at least three NFTs (Axies) in order to start playing. These Axies usually don’t offer a competitive advantage, still they are necessary for playing the game.

What are game tokens?

Game tokens are cryptocurrencies issued by a blockchain game that can be used to purchase in-game assets, create or upgrade weapons, or even access exclusive in-game tournaments. Users can earn these tokens by playing the game, completing quests, or competing and winning against other players.

For example, the in-game token of Axie Infinity is Smooth Love Potion (SLP). This token is earned by playing the battle or adventure mode of the game and allows players to breed Axies. SLP also has market value and can be converted to other cryptocurrencies and even fiat currency.

NFTs, short for non-fungible tokens, are unique images, videos, or audio embedded into a blockchain. NFTs are a valuable breakthrough as they have brought an element of scarcity to the internet for the first time. While there are numerous applications for NFTs, a major boom was seen in the usage of NFTs in the GameFi industry.

NFT games are those games that support the implementation of NFTs. Such games utilize NFTs to represent various in-game products, including characters, consumables, and other tradeable items. For instance, a game could represent a unique character or avatar as an NFT.

Since in-game NFTs can be traded across NFT marketplaces, they have become a popular source of income in the world of GameFi. There is also a chance that players come across a rare in-game NFT, which is typically worth more. For perspective, some rare Axies have traded even for millions. 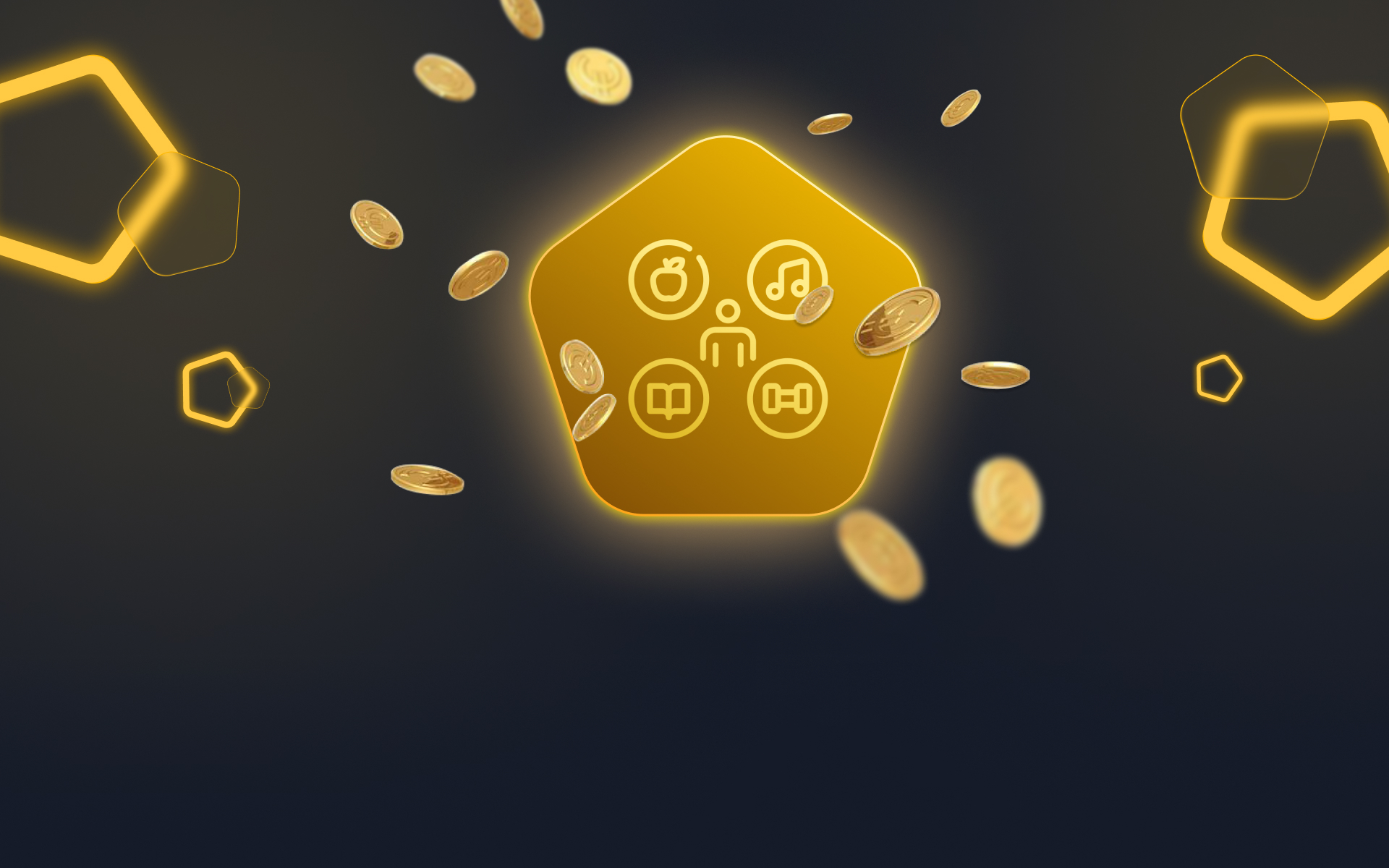 What are Play-to-Earn games?

A play-to-earn game enables players to make money while enjoying the gameplay. These games usually pay players in the form of NFTs or cryptocurrencies, which can then be traded to other more liquid digital assets or even fiat currencies using exchanges and marketplaces.

However, it is imperative to note that all such games require an upfront investment, which can be significant based on some factors like the value of the native token and the demand for the game. For instance, during the peak of the AXS token, new players had to invest around $1,000 if they wanted to join the game.

Is there a game that pays real money?

There are plenty of P2E games that pay out rewards in the form of cryptocurrencies or NFTs, which can be exchanged for fiat currencies. However, there is no such blockchain-based game that pays directly in fiat currencies.

That is because paying in fiat currency would undermine the need for an in-game token, which would then prevent the game from creating a sustainable economy.

What are play-to-earn NFT games?

P2E NFT games require players to initially purchase an NFT, which can be a weapon, a character, or an avatar, in order to start playing. Similar to other P2E games, participants can also make money off these games. However, since rewards might be distributed in the form of NFTs, they would need to use a marketplace to cash out.

Some examples of play-to-earn games

Popularized by Axie Infinity, the P2E model can now be found across dozens of blockchain-based games. Here are the top five games that implement this framework:

These are just a few of the major games that use the P2E model. To dig deeper, we recommend you check out our in-depth review of the top 10 blockchain games.

Meanwhile, those who prefer to invest in a play-to-earn game project in its development phase can participate in the Initial Game Offering (IGO) of the project. Besides cryptocurrency tokens, IGO participants can also get early access to in-game assets. However, it is important to do a lot of research before investing in any project.

What are Move-to-Earn games?

Move-to-earn games reward players with cryptocurrency in exchange for physical activities like working out, walking, and running. Since these games incentivize users to pay attention to their well-being by giving them crypto rewards, it can be argued that they combine the fitness industry and the crypto industry.

Generally, move-to-earn games use technology to track the movement of players and pay out rewards accordingly. The rewards are capped daily, meaning a player can’t work out the entire day with the premise to earn more. Hence, participants are encouraged to follow their usual fitness routine.

These games also implement NFTs in the form of sports accessories like sneakers. Users who want to join these games would initially need to purchase at least one of these NFTs.

StepN is one of the biggest and most famous move-to-earn games that rewards users for walking, jogging, or running. Founded in 2021, the game describes itself as a self-styled “Web3 lifestyle app.” Moreover, the game is built on the Solana blockchain, one of the fastest and most scalable blockchains to exist.

StepN uses a GPS system to track the number of steps that a person has moved to reward them based on that. To start earning with the game, players are required to buy a pair of NFT sneakers. They also need Energy, which is spent at the rate of 0.2 units per minute.

With one sneaker, the maximum energy is two. Therefore, a user with one pair of sneakers can earn rewards for a maximum of 10 minutes, meaning after the 10 minutes they won’t earn more even if they continue running. To increase the amount of Energy, players would need to purchase more sneakers.

Meanwhile, StepN pays out rewards in the form of its native token Green Satoshi Token (GMT), which can be traded for fiat currency across major crypto exchanges. Naturally, rarer sneaker NFTs will allow users to earn more rewards. The game is already available for Android and iOS.

What are Learn-to-Earn crypto games?

Learn-to-earn is the integration of the education industry and cryptocurrencies. This model rewards users for understanding how specific cryptocurrencies work, and usually pays out rewards in the form of the underlying cryptocurrency in order to have the user try it out. 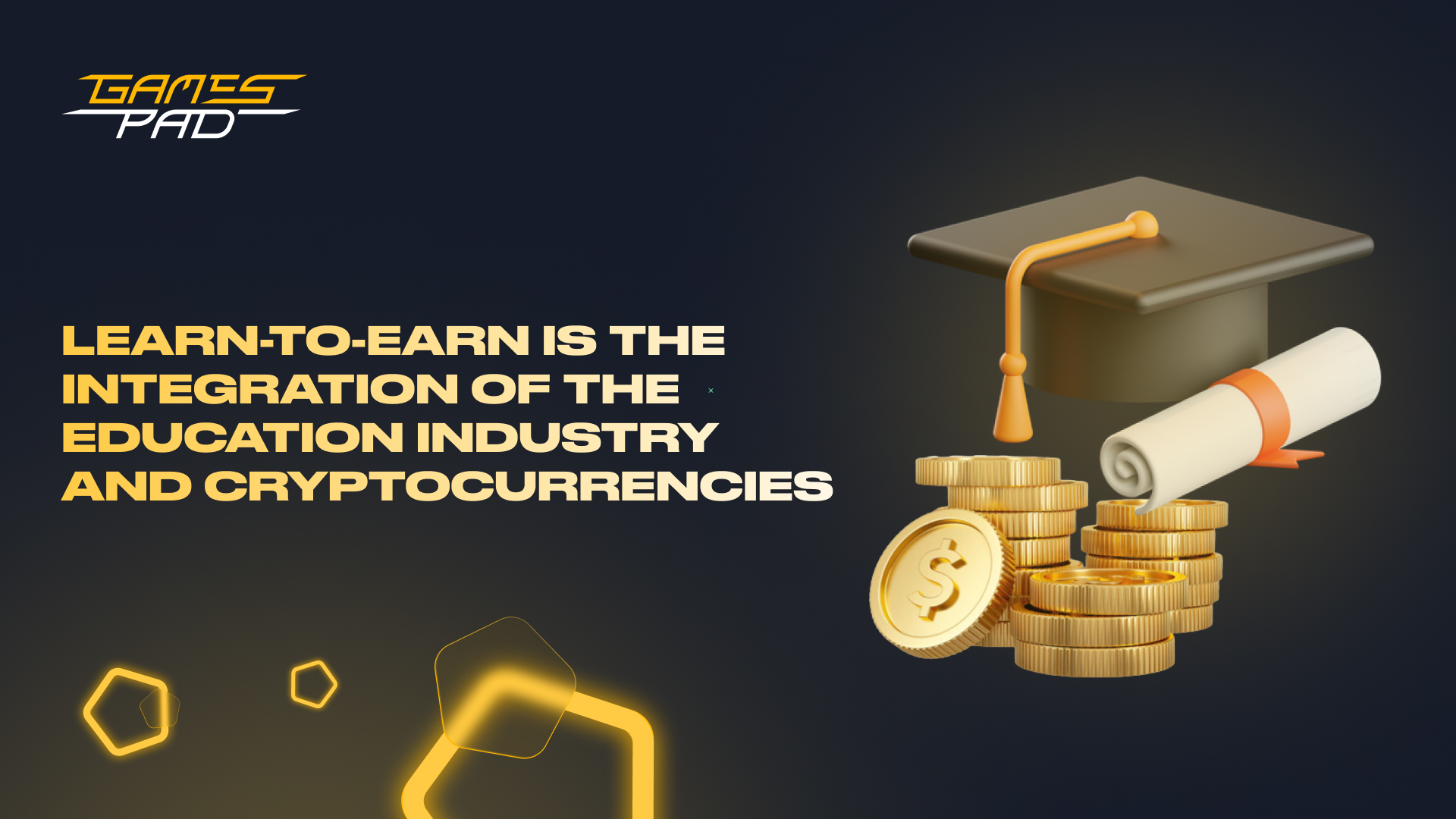 How can you earn by learning something new?

Platforms like Binance Academy and Coinbase Earn enable users to earn coins while learning about them in an engaging manner. These platforms believe the best way to acquire knowledge about something is to engage with it, which is why they are proponents of the learn-to-earn model.

The procedure is pretty straightforward. Users first need to watch videos on the specific crypto and then complete a short quiz or assignment to test their understanding of the subjects explained in the videos. The user would receive a reward when they correctly answer the questions.

LetMeSpeak is a major example of the learn-to-earn model, allowing everyone to make money while learning the English language. By incentivizing users with economic benefits, LetMeSpeak helps create useful learning habits and removes the main problem that makes people quit learning, which is the lack of motivation.

The application, developed by a team of professionals who have been engaged in language programs for over 10 years, allows users to expand their vocabulary, practice speaking, and improve grammar skills. The app also claims that it is five times more efficient compared to other Pay Upfront programs.

Similar to Play-2-Earn, the Learn2Earn model also implements NFTs. Users who wish to receive rewards need to first purchase an NFT character. They also need Energy, which is capped at 100 units per day. This helps balance the economy and encourages consistent learning.

Once a user has an NFT character and enough Energy, they can start earning rewards by learning new materials and completing tasks. The rewards are paid out in the form of LSTARs, which can be converted to USD Coin (USDC), used to purchase new NFT characters or to update existing ones, and more.

The game is already available for iOS and Web with an Android application coming soon. Users can also use the app without any investment, though they won’t be eligible to earn rewards. Additionally, the platform aims to expand beyond the English language in the near future.

Blockchain applications that implement the Do-It-To-Earn model are certainly promising as the incentive helps them reach a wide audience easily. While the model has already found its way to a number of industries, ranging from gaming and fitness to learning, it also has the potential to push into many new sectors.

An important aspect of this model is that it rewards users in exchange for simple, everyday activities like playing, exercising, and learning. The majority of these activities are also fun to do, which is why they easily appeal to a wider audience.

The meteoric rise of GameFi and the Do-It-To-Earn frameworks has been nothing short of extraordinary. Since making an appearance first in 2020, the total market cap of GameFi projects has exceeded $55.38 billion, and that is arguably just the beginning. Therefore, it is evident that there is a lot of opportunity for prospective investors.

However, it might be hard to find a reputable place that offers you exposure to these nascent projects. This is where GamesPad comes into play. GamesPad is the ultimate gaming, NFT, and metaverse ecosystem that allows you to invest in various play-to-earn, move-to-earn, and other Do-It-To-Earn projects. You can get started with Gamespad here.

Subscribe to be the first to know when we launch

Be the first to know our hottest news